Lets break out the ATtiny85 and create an Arduino alike development board.

Proto 0.01 Work on the idea with Fritzing Proto 0.02 Testing the idea with a functional board 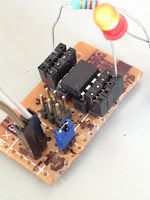 Using an Arduino Nano as ISP on the ICSP headers 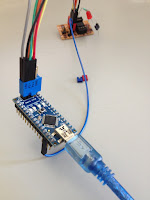 For a cleaner result it helps to add more traces on the board. With the other (cheaper) perfboard it became a problem when the soldering pads came off (both during soldering causing tension on connections and placing jumpers etc.)

The new board has trough hole pads enabling better mechanical characteristics (it's a part from a Arduino proteshield cut in pieces). It's easier to create traces and looks cleaner.